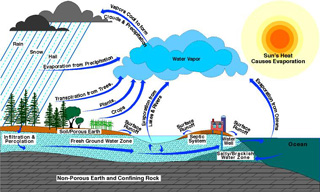 Even though the Earth’s surface is 70% water, 97% of it is salt water. Of the 3% that is fresh water, all but about 1% is locked up in ice at the poles. That means only 1% of the water on Earth is really useful to humans. That makes fresh water a relatively scarce resource1. To put that in another perspective: Imagine if you could only use 1% of the money in your wallet.  What could you buy with that?

It literally comes from the sky

The hydrologic cycle describes how fresh water is created by the sun. The heat from the sun causes the water of the surface of the Earth to evaporate.  When the water evaporates it leaves behind the salt and other minerals that it had in it.  When it condenses again and falls to the Earth (in the form of precipitation), it is fresh water.  It will either drain back to the ocean or be evaporated again.  This cycle just keeps repeating.

1The English word ‘rivals’ comes from the Latin word rīvalis , which literally means : one who shares the same brook.  The notion being that neighbors compete for a precious resource.