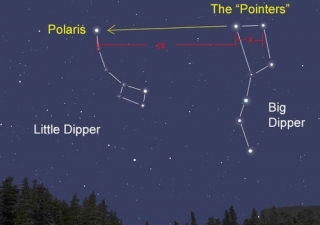 A decent compass is so inexpensive that everyone should own one.  But if for some reason you find yourself trying to locate north without a compass,  here are some techniques to get you pointed in the right direction.  I’ve organized them from most accurate to least accurate.  If two methods are equally accurate, then I have listed the easier one first.

1.) Locate the North Star.  This method will accurately show you true north but it only works at night , in the Northern Hemisphere and when you have a clear view of the sky.

Step 1. Place a stick (about 3ft long)  into the ground at a clear, level spot where it will cast a distinctive shadow. Mark the shadow’s tip. (Use a stone, twig, etc.)  This first shadow mark is the west side of the line you are about to draw in Step 3.

Step 3. Draw a straight line through the two marks to obtain an approximate east-west line.

Step 4. Stand with the first mark (west) to your left and the second mark to your right–you are now facing north.

This fact is true everywhere on earth.   I’ve tested this method with a compass and it does get you pointed ‘approximately’ north.

The time of day, the straightness of the stick, how perpendicular the stick is to the ground, how level the ground is, all affect the accuracy.   It is possible to very accurately find true north with the shadow method but it isn’t practical for use in the field.

Method 2  – Accurate but difficult (described  below).

3.) Using a watch face and the sun to find north/south.   At solar noon (when the sun is at the highest point in the sky), the sun is due south in northern hemisphere   You can use this fact and a functional watch set to the correct time for your time zone to estimate where the sun will be (or was) at noon. This method will be most accurate if you are physically close to the middle of your time zone.  If you are in the middle of a time zone, then noon in the time zone should be very close to solar noon (when the sun is highest in the sky).  This method is also more accurate the farther you are from the equator. Here’s how to do it:

In the northern hemisphere, hold the watch horizontal and point the hour hand at the sun. Bisect the angle between the hour hand and the 12 o’clock mark to get the north-south line.  This will point to where the sun was (or will be) at noon.

In the southern hemisphere, point the watch’s 12 o’clock mark toward the sun and a midpoint halfway between 12 and the hour hand will give you the north-south line

If your watch is digital, just draw the face of an analog watch on a piece of paper and use that instead.

4.  Make a compass from a needle.  Magnetize a small needle (by rubbing it back and forth from eye to point about 100 times with a piece of silk or wool)  then float it on a leaf or something small and it will point to magnetic north/south.   It works pretty well if you can figure out which end is north and which is south.  Note that it only points you to magnetic north not true north. They may be very different depending on your location.

I haven’t had a chance to test this extensively but it seems to work with the limited number of test cases that I tried.  I hope to track the moon for a month and see how well it works.