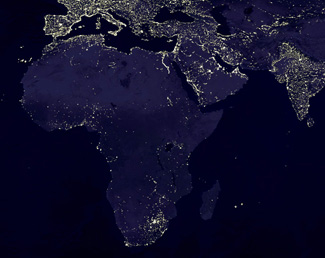 Water is absolutely essential to life1. In survival situations, there is something known as The Rule of Threes.  It says that you can survive 3 minutes without air, 3 hours in inclement weather, 3 days without water, 3 weeks without food.  We are going to assume that you don't  have to worry about air to breathe or freezing to death as you begin your journey from hatchet in the woods to sending an email.  That makes finding fresh water your highest priority.

It's no wonder that the first great civilizations emerged alongside freshwater rivers such as the Nile, the Tigris, the Euphrates, the Indus and the Yangtze. These fresh water sources provided the large quantity of water needed for farming.  You can clearly see the Nile from space at night. (Click on the image at right for a larger view)

Let's start with the basics.  You need to know:

The English word ‘rivals’ comes from the Latin word rīvalis , which literally means : one who shares the same brook.  The notion being that neighbors compete for a precious resource.

Its chemical formula (H2O) is the best known formula in the world.

Unlike other liquids, water expands when it freezes.  If it didn’t ponds would freeze from the bottom up. Ice is slippery partly because its solid form is less dense than its liquid form. When you step on ice you provide pressure that forces the ice to return to its more dense state of water. The resulting layer of liquid that forms between you and the ice is slippery.   If you step on solid iron, the pressure just encourages the iron to stay solid.

It is the only natural substance found in all three states (solid, liquid, gas) at the temperatures normally found on Earth.

1Scientists believe that life isn’t possible without liquid water.Dr.  Neil de Grasse Tyson, an astrophysicist and director of the Hayden Planetarium at the American Museum of Natural History says "Given that life on Earth is so dependent on water, and given that water is so prevalent in the universe, we don't feel that we're going out on a limb to say that life would require liquid water."