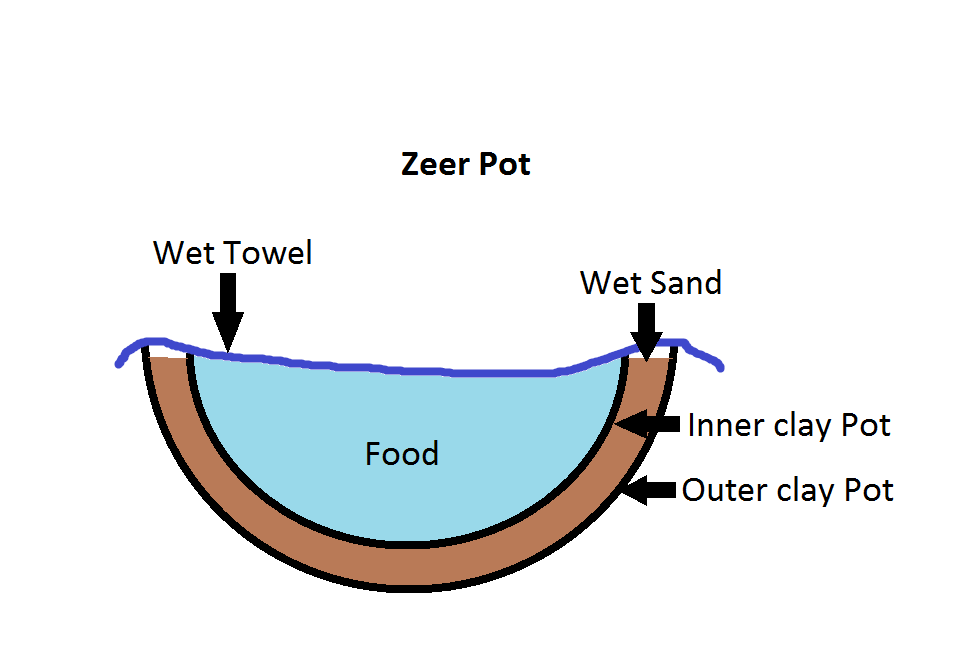 What is an evaporative refrigerator?

It is a device that uses the evaporation to cool a space that can be used to store food or water. An illustration of one version is shown at right.   This version was created by putting one earthenware pot inside another, filling the space between them with sand and then wetting the sand.  Food is stored in the inner pot which can be covered by a wet towel or a lid.  As the water evaporates from the sand, it cools the inner pot and its contents. The whole thing is easy to build and to operate and, best of all, it is inexpensive.  An added bonus is that the water used for cooling does not need to be potable. That sounds perfect for third world applications and it is most often in this context that the device is discussed.

How does it work?

When a liquid evaporates it loses energy.   This is why sweating cools us down.   The sweat on our skin evaporates and it takes a bit of energy from our skin with it.  This loss of energy provides us with a cooling effect.

The more thorough explanation for why evaporation causes cooling:

Is there a cooling limit?

Imagine water in a jar where the higher energy water molecules near the surface of the liquid are escaping into the air above the water.   If we put a lid on the jar, the water molecules will continue to accumulate and sometimes the collisions of these molecules will result in the molecule leaving the air and returning to the liquid water.  If the jar is left alone, eventually the activity will equalize.  The average energy of the molecules leaving the liquid will equal the average energy of the molecules returning to the liquid.  This equilibrium is what we would call 100% relative humidity.  The energy lost to evaporation is equal to the energy gained from condensation.  You can determine how close you are to the equilibrium point by taking the wet bulb temperature of the air and comparing it to the dry bulb temperature of the air.  If the wet bulb temperature is lower, it indicates that there is still room for molecules to transfer from the liquid into the air.

Let’s express the limits in a more visual manner

These charts show the minimum temperature that can be achieved by direct evaporation for a given temperature and relative humidity.   These numbers came from a psychrometric chart.   The chart lists the wet bulb temperature for various conditions. If you managed to achieve 100% efficiency with your evaporative refrigerator, this would be the coldest it could get.

So if it is 90°F (32.2°C) outside and  the relative humidity is 50% then coldest a direct evaporative refrigerator could possibly get is 74°F (23.3°C).   That is much better than no cooling at all but far less than what we expect with our modern day refrigerators which keep food at 40°F (4.4°C) or below.    On the other hand, the device is inexpensive, easy to build and operate.

What about using different designs or materials?

Let’s look at the various parts of the evaporative refrigerator:

The liquid: Water is the most practical liquid to use for evaporation.  It is readily available and it removes a large amount of heat per kilogram of evaporation as compared to other liquids.  For a practical refrigerator, it is really the only liquid that makes sense.

Container materials: The container for the food can be any material that conducts heat.   Materials that conduct heat better will cool down faster but the will also heat up faster when the evaporation stops.   It is probably a good idea for the container to be waterproof so that the food is saturated with the water that is used for cooling.   The outer container exists just to hold water for evaporation and to provide as much surface area for cooling as possible. That means is needs to be porous so that the water can seep through it and evaporate.

Material to hold the liquid:  Sand is often used because it is inexpensive and it has a large surface area.  But it could be sponges, charcoal or another material.  The most important features are that it holds lots of water and provides surface area for evaporation.

Shape: The shape of the container should have lots of surface area as compared to its volume.   The rate of evaporation is driven by factors such as temperature, air flow and the surface area.  Surface area is the only factor that can be controlled as the device is being built.  The idea is to maximize surface area and minimize internal volume.  The tetrahedron meets that criteria but it isn’t as practical to build as the more spherical shapes.

Size: The larger the container becomes the worse its surface area to volume ratio gets.  This means there is less surface area (less cooling) per volume of cooled area.  This chart from Wikipedia shows that a cube with sides of 1 meter would be much better than a cube with sides of 10 meters.  So it would be better to have several small devices than one large device in terms of performance of the cooler. 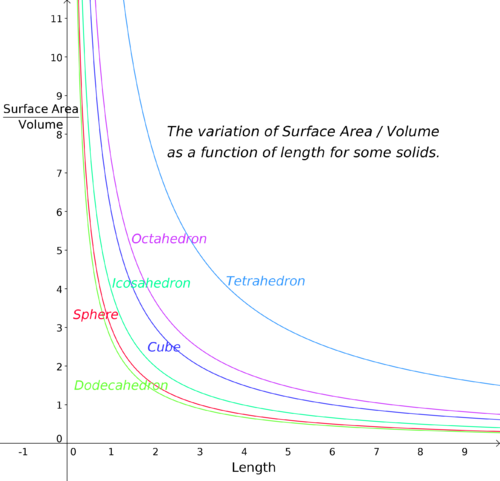 How to get the best performance:

Often people will suggest putting them in the sun so that the water evaporates more quickly.  That will work as long as the additional cooling from evaporation is greater than the temperature gain of the device sitting in the sun.  Probably more often than not, placing the device in the shade (preferably in a nice breeze) will be the best way to improve performance.  If you can elevate the device to get evaporation on all sides that would be even better.  The device cannot run out of liquid or the cooling stops.  That means it either needs a large water reservoir or it will need to be filled frequently.

Other ideas about burying them or placing them inside another pot are sure ways to slow down or stop evaporation.   At some point, trying to improve the performance of the device starts interfering with the utility and durability of the device.  The evaporation rate is largely controlled by the temperature, relative humidity and wind speed.

Evaporative coolers are a neat idea and when used in the correct environments they can provide much needed cooling for very little cost.  Just make sure your expectations are reasonable.  They will very rarely manage to keep temperatures as cool as our modern refrigerators.  Warmer temperatures and less storage space are part of the trade-off for their low cost and simplicity.