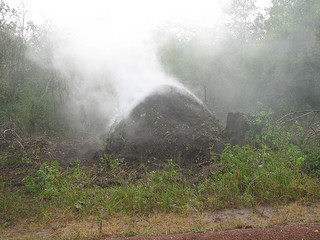 True. Charcoal can be made from anything containing carbon. Traditionally wood has been the raw material used to make charcoal. Wood consists of three main components: cellulose, lignin and water.  These compounds are composed almost entirely from atoms of hydrogen, oxygen and carbon.  Charcoal is made by removing the hydrogen and oxygen in the wood while leaving just the carbon.

2.)    Heating the wood in an oxygen limited environment.   Limiting the oxygen keeps the process from turning into full combustion which would reduce the wood  to ash. As the wood heats the following changes occur:

3.)    The wood should continue to be heated to between 450- 500°C.  A temperature of 500°C gives a typical fixed carbon content of about 85% and a volatile content of about 10%. The yield of charcoal at this temperature is about 33% of the weight of the oven dry wood.

4.)    The wood is allowed to cool in an oxygen limited environment to prevent the oxidation (combustion) of the remaining carbon.

Traditionally this was done by piling dry wood into a dome shaped mound.   The mound was then covered with smaller branches, leaves and finally dirt.  Covering the mound limited its exposure to oxygen. A flue was left open in the middle of the mound to introduce hot coals and start the mound to smoldering.  The shape of the mound is important because as the wood transforms to charcoal it shrinks in size.   This shrinking inevitably causes holes in the outer covering of dirt which allows more oxygen into the mound.  These holes have to be plugged quickly or the mound will catch fire and all the potential charcoal will go up in smoke.  Planning for the shrinking of the mound helps to minimize the work in plugging holes as they appear.   The key is to keep the entire mound smoldering but not burning.  This requires constant attention.  If there isn’t enough oxygen the mound will cool too much and if there is too much oxygen the mound will catch fire.  The Swiss have been making charcoal this way since the Middle Ages. It might take two men three weeks to build the mound of 700kg (1500lbs) which will then burn for 12-18 days.  The charcoal burner must spend the entire time by the mound tending to it as it smolders.

A more modern method (and one that requires less attention) is to seal up the wood in a fireproof container with a small hole in it so that it can vent the gasses that are produced and then place the container in a fire or kiln.   This allows more attention to be paid to the fire that is providing the heat without having to worry that the wood being charred is being exposed to too much oxygen.  Here a steel barrel has been converted to a charcoal kiln.  The wood would be loaded into the barrel and then it would be sealed up.  A fire would be lit underneath the barrel to provide the necessary heat.  Note how it vents the gasses from the barrel back into the fire with the tube that comes out of the barrel.  This set up could be made much more efficient if the barrel were surrounded by earth or bricks to help trap the heat.   (Photo from http://www.instructables.com/id/How-to-Make-some-Charcoal/)

Odd Notes: The process of driving off the hydrogen and oxygen by thermal decomposition is called pyrolysis.  Pyrolysis is the same process that is used to turn coal into coke. It is also used to make carbon fiber. When carried to an extreme so that it leaves mostly carbon residue it is called carbonization. 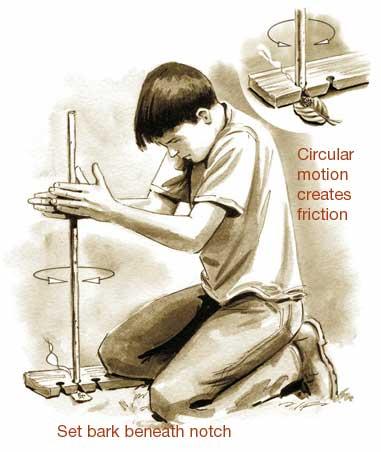 Answer: The type of wood used for the spindle and hearth board is crucial to making an ember. This is an often overlooked fact in many descriptions of making fire by friction.

What you are trying to do is create a very fine wood dust and then heat it to between 371-426°C (700-800°F). When that occurs, the wood dust starts to glow and it forms an ember much like the tip of a lit cigarette. That glowing ember can then be coaxed into a flame by adding it to a bundle of very dry tinder and blowing.

There are several ways to try to accomplish this; bow drill, hand drill, fire plow, or fire saw. They all have one thing in common. The type of wood used is crucial to making an ember. It comes down to the quality of the wood dust formed during friction and the ability of the wood to retain the heat where the dust is forming. Low density woods (softwoods) don’t transmit heat as well as hardwoods and therefore they keep the heat concentrated near the wood dust.

Storm's guide to using the hand drill should get you started http://stoneageskills.com/articles/handdrill1.html